On November 14, 2013, Dunnington, Bartholow & Miller LLP triumphed in a major case for Germany’s Vorderasiatisches Museum (part of the Pergamon Museum), obtaining the return of a 3,200-year-old Assyrian amulet in a landmark decision, Matter of Flamenbaum, by the New York Court of Appeals, New York’s highest court. 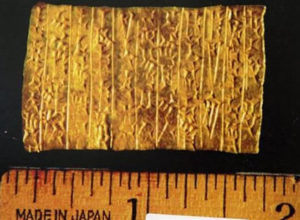 The 9.5-gram gold tablet was excavated from the Ishtar Temple in modern-day Iraq in 1913 and went missing during World War II when the Pergamon Museum, located in East Berlin, was occupied by Soviet troops. Its whereabouts became known following the death in 2003 of the man who transported it from Germany to the United States.

Both the oral argument before the New York Court of Appeals and the decision were reported widely in the international press and have been carefully watched by the international museum community. The Flamenbaum decision reaffirms New York State’s commitment to the common law rule protecting true owners of lost or stolen property. Under the U.S. legal system, federal courts are bound to apply the law of the state in which they sit, absent a conflict of laws rule or agreement to the contrary. The Flamenbaum Court rejected the contention that the Museum had lost its rights under the laches doctrine, which, under certain circumstances, may cut off the rights of true owners of lost or stolen property where lack of diligence has prejudiced a person who acquires property in good faith. More significantly for the museum community, the Court disallowed the “spoils of war” argument, based on the claim that because the Soviet government gained the Museum’s property as a “spoil of war” when it invaded, the transfer of title from the soldiers to Flamenbaum was valid. Rejection of this doctrine makes clear that the WWII-era U.S. policy against pillaging of cultural artifacts is still very much alive.

Oral arguments at the New York Court of Appeals are all videotaped and streamed by webcast.  Matter of Flamenbaum was argued on October 15, 2013 and may be accessed at http://www.nycourts.gov/ctapps/arguments/2013/Oct13/Oct13_OA.htm.   The New York Court of Appeals is known as a “hot bench” in which the judges have read the papers carefully and are renowned for lively questioning of appellate advocates.  Visitors to the webcast will be treated to an entertaining example of the adversarial system of justice in the United States.

Following the successful appeal on December 4, 2013, Surrogate Edward McCarty of Nassau County supervised the return of the Ishtar Tablet to a museum representative. The Museum is planning an exhibition in Berlin in which the Ishtar Tablet will be made available to the public and to scholars.

Dunnington is a full service law firm providing corporate, real estate, taxation and estate planning services for an international clientele.  Dunnington’s litigation team has considerable experience representing international clients in federal and state litigation, appellate work at all levels, arbitration, and mediation.  Raymond J. Dowd, who successfully argued the Museum’s case, is the author of Copyright Litigation Handbook (Thomson Reuters 7th Edition 2013-2014) and was appointed to serve on the Second Circuit Judicial Conference Planning Committee 2013-2014.  Mr. Dowd served as General Counsel of the Federal Bar Association and currently serves on the Board of Directors. He is a Co-Founder of the New York County Lawyers Association’s Art Litigation and Dispute Resolution Institute, an annual day-long legal education program featuring judges and leading art law practitioners. Mr. Dowd may be contacted at rdowd@dunnington.com.