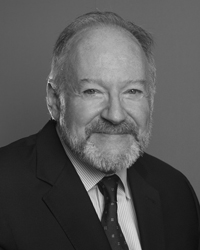 Frederick W. London is a member of Dunnington’s international, corporate, employment and charitable, not for profit and religious institutions practice groups and serves as co-chair of the Latin America desk.  Mr. London concentrates in international corporate acquisitions and litigation management and representation of not for profit organizations.  He has been with the firm for over 20 years. Mr. London’s other positions included serving as General Counsel of two European based publicly traded companies (Securitas AB and Hexagon AB), General Counsel of Pinkerton’s Inc. in California and an attorney in the Enforcement Division of the U. S. Securities and Exchange Commission in Washington, D.C.

Mr. London sits on the Board of Directors of the Cicero League of International Lawyers, Securitas Group Reinsurance (Ireland), Securitas Transport Aviation Security US, Inc. and the English Speaking Union of the United States.

Mr. London is admitted to the bars of the State of New York, the U.S. District Court for the Southern District of New York and the U.S. Supreme Court. He is a member of the American Bar Association and the Association of SEC Alumni.

Mr. London received his Juris Doctorate from Georgetown University and his Bachelor of Arts from Princeton University.