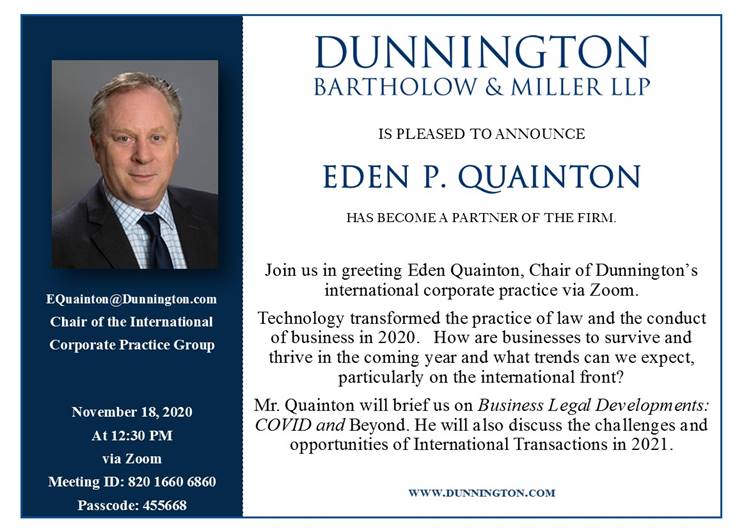 Mr. Quainton is a member of Dunnington’s corporate, international, France and Latin America Desks, litigation/ADR and employment practice areas. Mr. Quainton’s practice focuses on corporate transactions and civil litigation. He speaks French, Spanish, Russian and Italian, and has a working knowledge of German.

Mr. Quainton has represented clients throughout the world, in Latin and North America, Europe, Russia and the CIS, Asia and Africa, with a particular emphasis on France and the former Soviet Union. Mr. Quainton’s current focus is on small and medium-sized businesses, individuals and non-profits, although he has extensive experience on large cross-border transactions. Mr. Quainton advises on mergers and acquisitions, joint ventures, capital markets, contract negotiation, and strategic advice. Among other recent transactions, Mr. Quainton has advised an autonomous vehicle start-up in connection with a joint venture in China, a French advertising and public relations firm in an acquisition by a US marketing and communications firm and a pan-African NGO in connection with its corporate governance and strategic financing options. He also serves as the general outside counsel to several clients, advising on employment, fundraising, governance, litigation and transactional matters.

Mr. Quainton maintains an active litigation docket, including an array of cases in State and Federal court, at both the trial level and on appeal. He is or has recently been lead counsel on defamation, civil rights, RICO, “business divorce,” “me too,” real estate and general commercial matters. He has represented clients on appeals before the DC Circuit, the New York Appellate Division and the New Jersey Appellate Division. Mr. Quainton has represented clients in arbitration proceedings before the ICC and has helped resolve numerous matters for clients through mediation.

Mr. Quainton’s language skills and international background make him a valued advisor to clients in cross-border investigations.   He has handled a number of sensitive investigations, including an investigation of the Department of Defense for the Republic of Kazakhstan in connection with the sale of aircraft to North Korea, an internal investigation for a US Fortune 100 company of its French subsidiary, and an FCPA assessment for an investment bank with a stake in a major provider of outsourcing solutions in India.

Mr. Quainton is admitted in New York and New Jersey and in the Southern, Eastern and Northern Districts of New York, as well as the District and Circuit Courts for the District of Columbia. He was the first American admitted to the Paris Bar on the basis of a competitive examination and was a member of the Paris Bar from 1996-2010.